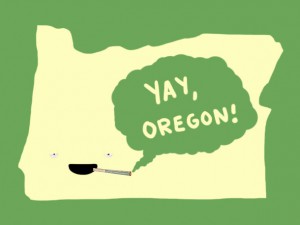 Dominique Lopez, metro regional organizer for New Approach Oregon, said in a statement. “Treating marijuana use as a crime has failed, but together we can win a more sensible approach and better the lives of Oregonians.”

The New Approach Oregon campaign was successful in gaining enough signatures to qualify a measure to legalize, tax and regulate marijuana for adults 21 and over, on the ballot. Officially called the Control, Regulation and Taxation of Marijuana and Hemp Act, The measure would allow for licensed manufacture and sale, of marijuana, as well as ensure the safe distribution of the drug by placing authority to oversee and regulate recreational sales under the jurisdiction of the Oregon Liquor Control Commission. Legal sales would begin in January 2016.

According to the measure, recreational marijuana would be taxed at $1.50 a gram or $35 an ounce. That money would be used for schools, law enforcement, drug treatment programs and mental health programs.