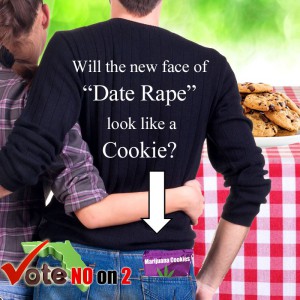 Amendment 2 is on the November Ballot in Florida. If passed, it will legalize medical marijuana in the state. Close to 90% of Floridians support medical marijuana. Of that small minority that are opposed to medical marijuana, and even smaller minority has thought it appropriate to Lie and use scare tactics in an attempt to sway enough of the normal people to vote against Amendment 2.

Although most of us are smart enough to see the BS for what it is, there are some truly offensive remarks made in the No on 2 campaign that I feel I must address.

One of the ads for No on 2 says ‘Will the new face of “date Rape” look like a cookie?’. This statement is ridiculous and offensive. Typically, alcohol and Rohypnol are used for “date rape”.  According to Wikipedia, a date rape drug is any drug intentionally used as incapacitating agent to assist in the execution of drug facilitated sexual assault. As someone who has eaten many marijuana edibles, and even eaten “too much”, I can tell you one thing. Marijuana edibles are not an “incapacitating agent”.  Too much marijuana reduces the euphoric high associated with marijuana (we used to call it smoking yourself straight). It also brings on an overwhelming sense of paranoia, and causes you to be a bit agitated. These are horrible quality’s to have in a “date rape” drug.

Another claim by the No on 2 folks is that Marijuana cookies will be everywhere and your kids will eat them up on accident. The campaign asks “How is anyone supposed to know the difference?” Well, let me give you a few ways: 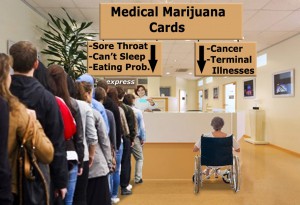 There is one ad in particular that really offends me. It shows people standing in line for a medical marijuana card. One line, labeled cancer, terminal illnesses, has one person in it. The other line, labeled sore throat, eating problems, can’t sleep, has a long line. I believe this ad is trying to imply that most “medical marijuana patients” don’t really need medical marijuana. I was first prescribed marijuana to treat residual effects from nerve damage I received in my leg due to a workplace injury. The nerve damage left me with parts of my leg that are sometimes numb, and sometimes throbbing in discomfort. The later would keep me from sleeping. I tried other prescription sleep aids that either didn’t work, or worked to well (often causing me to oversleep, and still feel groggy for the first half of the day).  Marijuana reduced the throbbing in my leg so I could sleep, and left no residual effects in the morning.. To marginalize that, or worse yet, to claim that people like me are just looking for an excuse to get high is offensive, heartless and cruel.

The last ad that I will talk about from the No on 2 campaign (although most of them are scare tactics and lies) is the continued claim that Amendment 2 will allow teens to get marijuana without parental consent. The law requires minors to get parental consent, but 18 and 19 year olds are not minors. They are adults who can fight and die for our country, who can get any number of prescription medicines (including amphetamines, opiates, and cocaine) from a Doctor without parental consent. Of course the ads want you to believe that your 13 year old will be able to walk into 7-11 and buy pot cookies and get date raped. This is just ridicules and untrue. 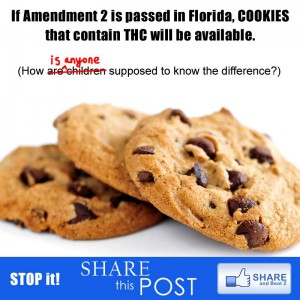 I also would like to address the one complaint from the No on 2 folks that some people are actually buying into.  They claim that the amendment does not have enough clear definitions (of what ailments pot may be prescribed for, of zoning for dispensaries etc) Yet the group (that claims to be conservative even though they are pushing for bigger government), doesn’t seem to acknowledge that the Amendment was written to allow for local governments to fill in the regulations that make the most sense for their particular communities. Instead, this group wants a large, overreaching, government mandate against a plant. In the early part of the 20th century, several anti marijuana bills were shot down for the simple fact that Americans believed they had a constitutionally protect right to the pursuit of happiness, and it was not the governments place to regulate a plant. These days, we have groups like No on 2 that promote big government interference in your life through scare tactics and lies. These folks should be ashamed of themse