From the dawn of recorded history, marijuana has been a valuable crop to mankind. Used in everything from rope and cloth manufacture to medicinal uses. George Washington (America’s first President) is quoted as saying “Make the most of the Indian hemp seed, . . . and sow it everywhere!”.

Federal control of marijuana was first attempted in 1937 with the passing of the Marijuana Tax Act. This law ruled that growers of marijuana had to pay a tax based on the weight of marijuana that they grew. It was illegal to be in possession of marijuana with a tax stamp. However, the grower had to produce the harvested marijuana to be weighed so that he could get the tax stamp. This would then result in the growers arrest for having marijuana without a tax stamp. The law was ruled unconstitutional in 1969 in the Supreme Court case Leary v. United States. As a direct response to this ruling (that effectively legalized marijuana possession in all 50 states), the US added marijuana to the Controlled Substances Act of 1970. Marijuana was added as a schedule I Narcotic under the advise of Assistant Secretary for Health and Scientific Affairs Roger O. Egeberg who stated in a letter to congress:

‘…Some question has been raised whether the use of the plant itself produces “severe psychological or physical dependence” as required by a schedule I or even schedule II criterion. Since there is still a considerable void in our knowledge of the plant and effects of the active drug contained in it, our recommendation is that marihuana be retained within schedule I at least until the completion of certain studies now underway to resolve the issue. If those studies* make it appropriate for the Attorney General to change the placement of marihuana to a different schedule, he may do so in accordance with the authority provided under section 201 of the bill..'”

Those studies were concluded in the 1972 Schafer Commission report, which recommended removing marijuana from the scheduling system and decriminalizing it. Those recommendations were ignored. This has brought us to our current situation where the law clearly states that the Attorney General should re-schedule any substance that does not fit the criteria for it’s current schedule into a schedule more fitting for it, yet for over 40 years, no Attorney General has moved marijuana away from schedule I. Meanwhile, cocaine, mdma (ecstasy), and opium (among others) all enjoy a schedule II or below classification allowing them to be used for medicinal purposes, legally, in all 50 states. 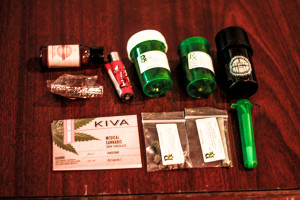 Automation decreases the need for manufacturing jobs. Mobile pay kiosks decrease the employment need for cashiers at restaurants, and retail stores. High speed connectivity has pushed many customer service and technical jobs to oversees markets where favorable exchange rates and lower cost of living provides inexpensive labor. These examples we have already started to see. Not only will they continue, but technological advancements on the horizon will continue to impact jobs. Self Driving vehicles will eliminate the need for chauffeurs, cab drivers and delivery drivers, as well as reduce the need for police focused on traffic duties, and they will have a strong impact on the insurance industry. Connected homes will severely impact the home security industry as well as impact police personnel dedicated to burglary cases. 3D printing will further decrease manufacturing and retail jobs. Advances in genetic science will soon decrease medical, and pharmaceutical jobs.

With our countries current job situation, and these advancing technologies on the verge of disrupting many more job markets, it is imperative that we find new opportunities for income generation.

Legalized marijuana is the opportunity we need to create jobs across multiple fields. Retail stores to sell the marijuana need “baristas” and security, and they need to rent storefronts from which to sell. Grow operations need to rent facilities, and hire security as well as employees to grow, harvest and trim the product. Labs are needed to test the quality of the product being sold. Bakeries are needed to create marijuana edibles, the list of jobs goes on. Hemp (for paper, textiles, and even building materials like hempcrete) need vast amounts of land to grow, and harvest, and vast amounts of employees to maintain such operations. All of these operations will also create tax income to the state and federal government.

The Marijuana Industry has the potential to create millions of jobs, and strong economic growth. While the taxes generated from the marijuana industry has the potential to relieve a large amount of the tax burden citizens currently bear. Considering marijuana should have been legalized 40 years ago, it seems absurd that we hold on to incorrect presumptions of the “dangers of pot”. If we want economic growth in the face of technological job loss, we need to embrace legalization and regulation of the marijuana industry in the same way that we embraced the legalization and regulation of the alcohol industry after the repeal of prohibition in 1933.