I’ll admit it, I bought a bottle of Snoop Dogg’s Doggy Sauce as a joke. I just thought it would be funny. Snoop Dogg Medicinal Marijuana Hot Sauce! A simple joy of living in Southern California. 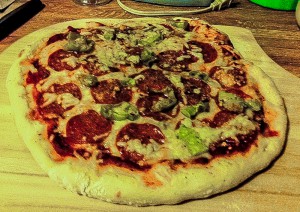 I Bought this, took it home, and that night I made a pizza and put it on. I took some pics and sent them to my sister, and we laughed about it. I ate the pizza, smoked a bowl and didn’t think much of it.

The next day thing got interesting. I work from home, and about mid day felt a bit hungry. I opened the fridge and low and behold, there was left-over pizza. I ate the remaining pizza not thinking twice about the hot sauce on it.

A little while later, I was doing some work and began to realize I was stoned. I thought “that must of been some good weed, I don’t remember smoking it…” I then realized it was from the hot sauce on the pizza…

As far as flavor goes… well Doggy Sauce isn’t anything special. Think Tabasco with a hint of weed. The flavor of the sauce really does hide most of the cannabis flavor, and it is a nice relaxing addition to  dinner.

I would say pick some up if you see it.

And if you are missing any Snoop Dogg tunes in your collection, you can get em on iTunes!