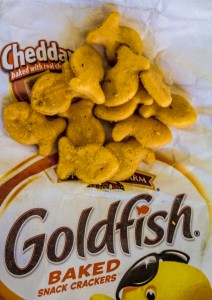 Who doesn’t love Goldfish crackers? When I was recently at my local dispensary, I saw Marijuana Goldfish Crackers, and just had to try them.

I was planning a long distance trip, and since I use medical marijuana to deal with the effects of nerve damage I received in a workplace injury, and the place i was traveling to is not as accommodating as California, I decided that marijuana edibles would be a good way to medicate while on the road.
As a word of warning, unlike many marijuana edibles I have tried, these marijuana goldfish crackers have a strong marijuana aroma. (As an interesting side note, I was stopped, and had my car searched by a k-9 unit along the way. the police overlooked the goldfish crackers, but I am unsure if that was the dogs mistake, or the officers)
Upon arriving at a hotel on the road, i decided to give the marijuana goldfish crackers a try. I have to admit that I changed the packaging on the crackers, and wasn’t sure what the suggested serving size was. I had a two handful,s, and then proceeded to watch some tv. a few moments later, I inadvertently had another couple handfulls of the marijuana crackers. Immediately I knew I had made a mistake.
Now to put things into perspective, i had been driving for many hours at this point and was suffering from some serious sleep deprivation. Within an hour of my initial dose, I began to feel the effects of the marijuana goldfish crackers. These marijuana edibles had the effect of a very strong Indica.

I felt the heavy Indica head high and heavy eyelids (although I had just driven 40 hours with only 2 half hour naps… so those heavy eyelids might not have been due to the marijuana goldfish crackers). The muscle relaxation was intense, and I was quickly ready to fall into a much needed sleep. Unfortunately for me, I had some work to do, so I forced myself to stay awake a bit longer. Aware that I had taken a bit to much, I wandered down to the hotel vending machines, and got some sugar.

For those that are unaware, sugar will bring you down from a marijuana high.

As I was working and waiting for the sugar to reduce the effects, I began to notice the mild hallucinations of dancing shadows out of the corner of my eye. Again, this was likely more due to the sleep deprivation then to the actual marijuana goldfish crackers, it was enough to make me decide to put my work down, and go to sleep. I slept soundly through the night, and awoke the next morning refreshed.

If you see the marijuana goldfish crackers in a store near you, I would recommend you give them a try. Just be careful how much you take.