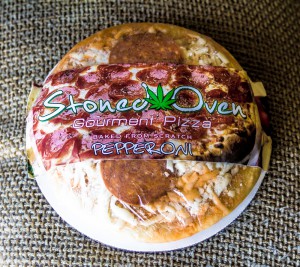 Why hasn’t this been done sooner? Marijuana Edible: Pizza

I recently stopped by The Healing Touch in Encino Ca, and saw they had marijuana infused pizzas! Well I had to try one of these! They are rather small pizzas, but the packaging claims it to be 250mg of THC, and that is supposed to equal 4 doses. I have mentioned in previous edible reviews that 50 – 75 mg is usually a good dose for me when it comes to marijuana edibles. However, the guy at the counter told me I should try half the pizza (2 doses, roughly 125mg according to the packaging.)

Well, I ate the whole thing.  It was tasty. Not the best “frozen pizza” I have ever had, but not as bitter weed tasting as I had thought. 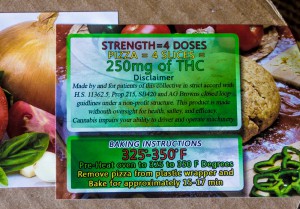 Now I have always heard that weed needs to be cooked at a low temperature when making marijuana edibles.  The instructions for this pizza are to cook it at 325-350. This seemed hi to me, but I followed the instructions. The heat likely did reduce the potency of the Marijuana. It has been an hour and a half since I ate the pizza (on an empty stomach) and I do feel a nice body buzz. However, I would consider this to be on par with about 2 doses of a PJ Butters bar (that would be 50mg by their count). Overall I am getting a nice relaxing body buzz, and not much of a head high. My guess (although it didn’t say on the packaging) is that this was Sativa based.

Another concern I have with edibles is that the potency may reduce as the product ages. The dispensary has been carrying these for about a month now, and I am not sure if this is still the first batch. If the pizza I tried was old, a fresher one may be a lot more potent. 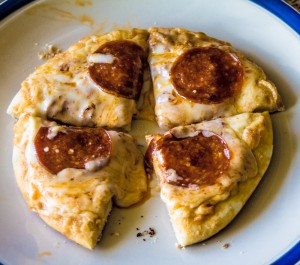 There has been a lot of concern in the media recently about people getting to high of a dose with edibles. I have found the opposite to be true. Edibles seem more like a curio to me. They are over priced, and not that effective. I have only ever felt that I had “to much” from an edible once, and the effects lasted 15 minutes or so before I was back into a normal level high…. Then again, I am a daily smoker so my tolerance is higher then most.